Well the project goes on (unlike a lot of New Year resolutions), and even in these early few days I have found out it really is a challenge.  Now it's not difficult to take a picture every day, but trying to find something interesting is; especially when it is lashing down with rain and I'm a bit fussy.  I also want to provide a bit of variety, even in the very limited world of monochrome.
Day 4, the 13th January, proved lucky for Misty as she had wandered from her home and I picked her up on the String Road before anyone hit her.  She had a lovely day, playing with my dogs, walking on the beach and gaining her moment of fame through facebook and twitter before being reunited with her owner.
Day 5 provided me with a lot of laughs as I had set off on a dog walk and came across some large drainage pipes.  The texture of these were ideal for the project and I set about getting a shot when the light shower turned to torrential rain.
Watson had the right idea and he took refuge inside, providing another shot, and he thought it was a great game running through all the pipes! 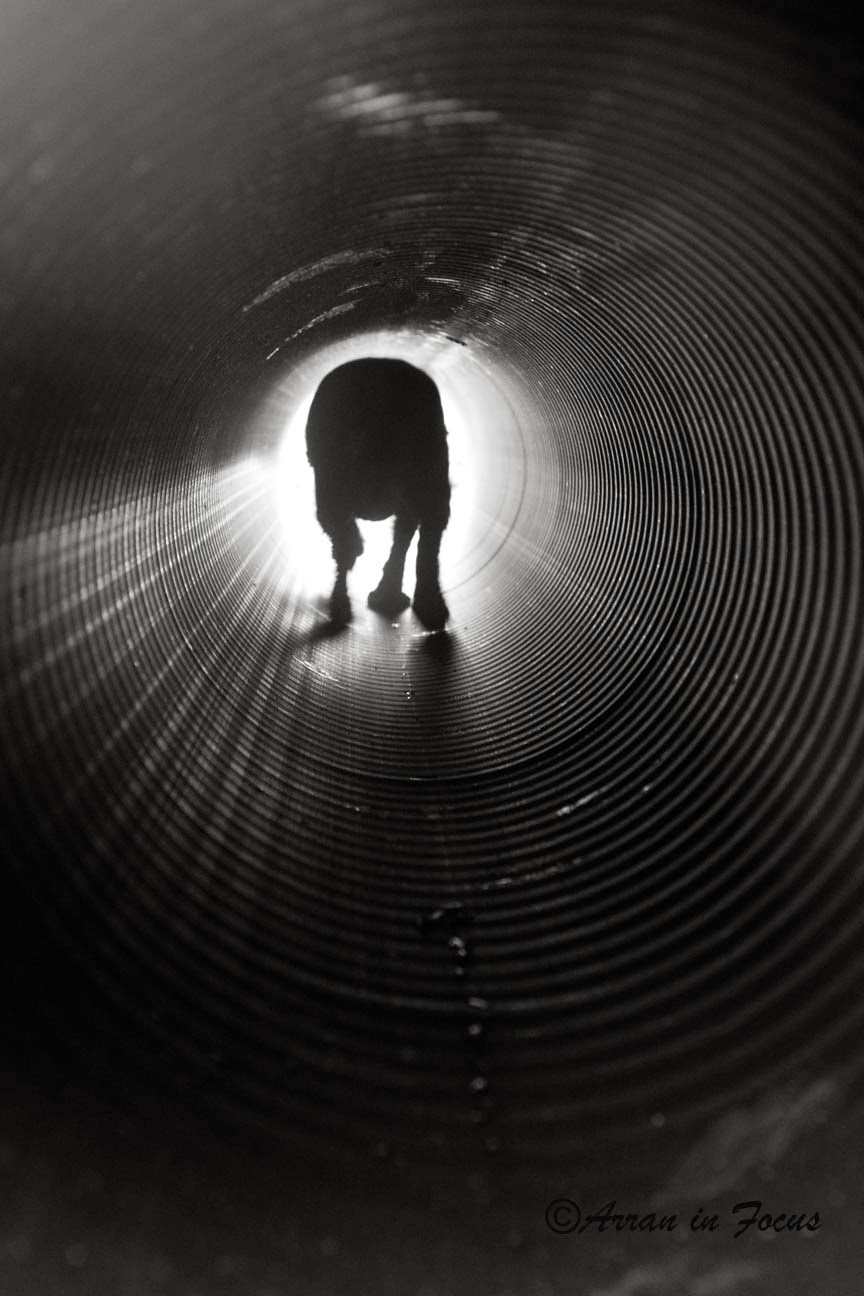 The following couple of days, gave me little time to think about photo's, so shots were taken on drives to and from different jobs, with a pair of curlews taken from my car window on day 6 and showing a lovely stone wall on day 7.
The sun shone, albeit briefly, on the 17th and I had a 1:1 workshop with one of the islands residents and although I usually don't take my own camera with me for these, I slipped a bridge camera into my pocket, just in case!  This was rewarded with some beautiful shots of sunlight streaming through the trees (colour versions have been tweeted and are on my facebook site) on the path to Goatfell.
After another soggy walk on Day 9, I finally decided that I should retire a pair of my boots.  These have seen some mileage and are totally worn out.  Maybe I'll put a plant in them in my garden come spring? I perhaps should say that it was about 10pm when I realised I had not done the obligatory photo and I was searching (in my PJ's) for a subject.
Another dog walk provided an opportunity to watch the local shepherd work his dog with a small flock of sheep. His calm stance while the dogs and sheep raced around cleared said everything was under control!
So with a start made I only have to come up with another 355 ideas!
Posted by Jackiesrunning at 11:26