It’s the year of Scotland food & drink & I've had the privilege of photographing some fantastic food products on the Isle of Arran, from exquisite restaurant plates, succulent cuts of meat and some fine fish.  But I also got the chance to see where some of the local produce comes from, specifically seafood, courtesy of Creelers of Arran.  The quality of the product reflects the state of our coast, for which some credit has to go to COAST & Howard Wood who has just won the Goldman Environmental Prize for Europe.
It has to be said that the stunning blue skies and flat calm seas are not the conditions the fishermen are used to but I put in a special request so that my camera wouldn't get ‘sprayed’ on as conditions would be difficult enough – have you seen the size of these small creel boats – and no sign of a bar for my 6 o'clock g & t!
But maybe I should start with what a ‘Creel’ is?  Often referred to as ‘pots’, these are a passive form of fishing (i.e. you don’t have to be there when the fish are caught).  And it’s a big industry in Scotland, according to the Scottish Creel Fishermen’s Federation it supports more jobs around the coast of Scotland than any other type of fishery.
So back to the Creel.  Traditionally it’s a wicker basket, but nowadays made of net, which is baited and left on the seabed with the hope that a lobster, crab or prawn will enter for food and get trapped until the creel is retrieved.  This type of fishing is sustainable and selective.
Only the target catch is retained, the by-catch (those just in the pots for a free lunch and unwanted) are returned to the sea unharmed. It also means that smaller, young or ‘berried’ (the term for the eggs) female lobsters can be returned.
At this early time of the year, all the lobster are too small / young or berried, but there was still plenty of viable ‘catch’, with crabs, langoustine and squab lobster (resembles a bug more than a lobster!).

Largely the 'by catch' seemed to be small crabs, which were shaken over the side, sometimes to awaiting gulls, which collected around the boat.
The catch is separated on the boat with the large crabs going into a bucket and the langoustine into special segmented trays.
Depending on the target catch, creels are baited with fresh fish or salted fish.  Fresh for the crabs and lobster, salted for the prawns.
The buoys mark where the pots are and there can be many pots on one line.  How the fishermen know which belong to them, I guess comes with experience, as several lines were out within very close distances.
Each pot is brought up, empties, re baited and then put onto the back of the boat until the line is finished, and then they are all returned to either the same place, or moved to a better fishing ground.
The evening chilled and we moved across the bay to the prawn pots.  The first thing that struck me was the vibrant colour of the langoustine as the were brought up. These chappies were destined for the dinner plate in Creelers Restaurant.

Each langoustine (prawn) was placed into it's own section of tray to keep them in pristine condition and as with the previous pots, all by catch was returned to the sea.
All pots empties and baited, they were flung back at high speed (no wonder fishing is dangerous), along the seabed.
The evening done, I took advantage of the sun setting with the seagulls scavenging for discarded bait to take some scenic shots.
A big thanks to Creelers of Arran, and other food producers on the island for providing us with such fantastic food, not just for Scotland's year of food and drink, but every year. 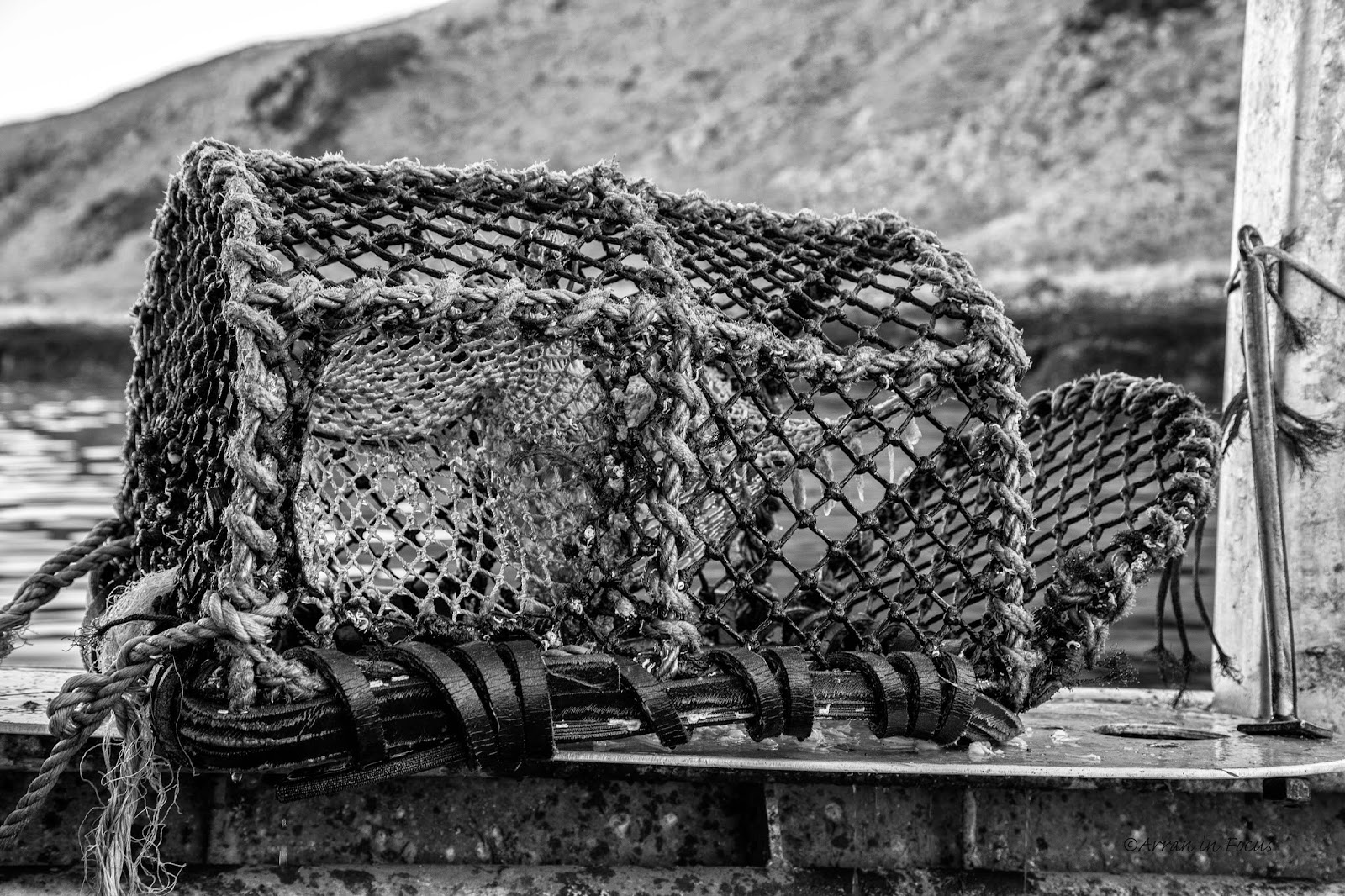