Mother nature at her best and worst!


Well scrap the blog I had written and here are some photo's from today - day 4 of the crisis?  It is an island of two halves, the east have no electric and the west has 6 foot of snow, no electric, no phones, and in most cases no water (requires a pump to get it to the houses!).  I managed to get about, with extreme care and some help from the services.


Day one, Friday, the electric went off about 7am (ish) I was still in bed and I did not get my butt into gear but fully expected it to be restored in a couple of hours.  Without the news I had no idea of the extent of the developing crisis!  By mid afternoon news had drifted through that we would be off overnight, no worries, camping stove out, fire lit and watched a DVD on the laptop and off to bed with a hot waterbottle.
Day two, oh how I wish I had got into gear yesterday, now there is no gas to be had (not of the type I use), and I had to brave a cold shower.  But good news, feeding stations have sprung up,,, free burger and chips! Then I spent the afternoon out on the 'mog' (a new Arran business), and we really got stuck into the snow side of the island.  All normal roads across are shut.
Day three, Pancakes for breakfast, and I now have a phone.  Ok, its a bit retro, but it doesn't need electric.  Supplies are being helicoptered to Lochranza - roads still blocked.  Got a phone call from the dark side (west of island) - snow plough has cleared some of the road from Blackwaterfoot to Machrie.  Actually a nice day.  Read a horror story before bed, probably not a good idea!
Day four, truly bad hair day!  More pancakes, and off to the dark side!  Thermostat in house reads 5c,,brrr.  Fantastic views and snow on the west side.  Got over before they closed the roads again! Then back to Brodick to try to source a generator for the Dougarie water pump (thank you Billy Bennett), and a lovely shower in the Fire station.
But the photo's say it all, snow right down to the sea.  So beautiful, it sort of makes you forget how cold it is!

Lots of these popping up.. 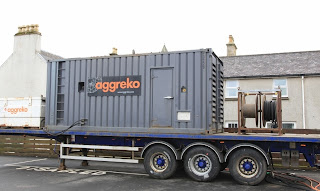 The dogs after a walk in the snow. 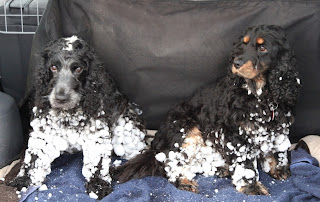 Lots of snow, even deep in the forest. 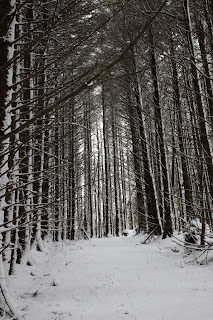