The pros and cons of window feeders. 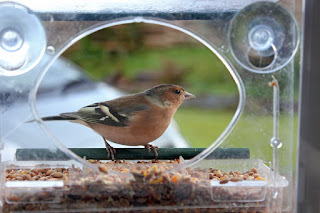 I have no idea why its frowned on to photograph birds on feeders - oh I know it can look nicer if a bird is on a tree / bush / rock etc., but that often requires time to set up a hide or feeding station, telephoto lenses and usually quite a bit of patience. The enjoyment I get from watching the birds in my garden has little to do with photography and more to do with the entertaining antics that go on around the feeders - of which there are many scattered around. 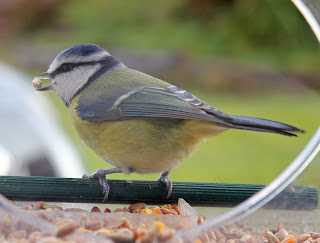 Earlier in the year I bought a window feeder - a bit expensive for a couple of pieces of plastic and 2 suction cups, but I hadn't fathomed a way of making a DIY one! I duly placed it on the window right next to my kitchen table not really expecting it to get much use.  I put a small amount of wild bird seed in the tray and went out.  Three hours later the tray was nearly empty!  Since that first day I have had a steady stream - actually I think it's been more of a stampede - visiting my window. I even get a wood pigeon, balancing on the windowsill and craning its neck round to peck at the seeds - frequently falling off the sill in a flurry of feathers. 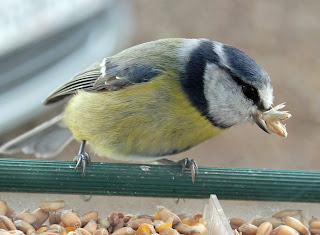 The blue tits spend a little longer on the tray often cracking the seeds and trying to stuff as many as possible in their mouths.


It's amazing to be so close, without binoculars, to be able to watch them skilfully hold the seeds and manipulate them around.

The blue tits seem to push off the coal tits, but are willing to share with the chaffinches.  The coal tits are very fast, flitting in and out of the tray, usually taking the largest peanut they can find. Apparently they hide them away for when food supplies are less abundant! There are frequent skirmishes between the coal tits with aggressive posturing to each other. 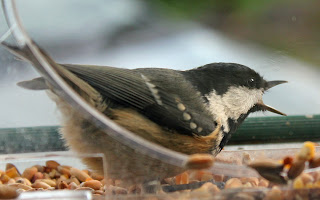 I was initially concerned that the birds may fly into my window and hurt themselves, but this doesn't seem to happen, although I do have a vase of flowers on the inside windowsill. However a number of birds spend time under the feeder trying to peck at the seeds above them! 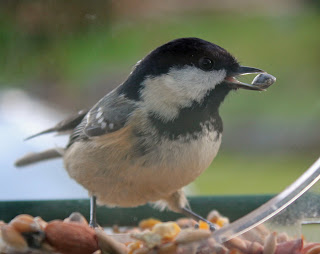 So what's the down side of a window feeder?

And the up side? 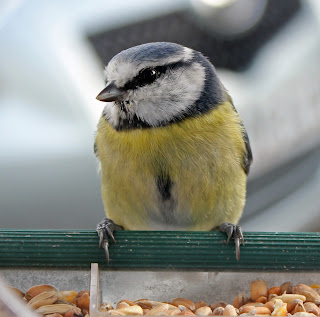 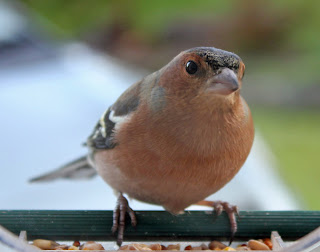 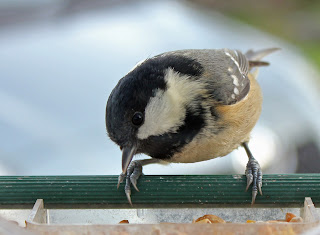 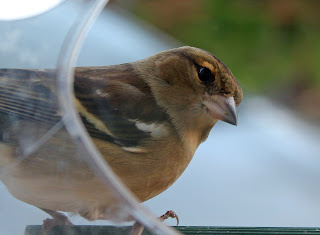