Snowdrops - the flower of hope

The scientific name is Galanthus nivalis, which means snowy milk white flowers This very delicate little flower is the harbinger of spring across Europe and is found both in the wild, and in gardens.  Its wild habitat is mainly woodland, but it can also be found in meadows, pastures, on stony ground and near water.

One of the reasons the snowdrop is popular in gardens is its ability to survive most environments without any interference from the gardener!

Now I have to admit being a little confused by the literature on this little plant as it is described in some texts as being ‘near threatened’, yet it is easy to find in most locations and there are millions of plants sold each year in garden centres, but these are of the ‘non threatened’ variety. Overall there are 19 types of snowdrop.

All snowdrops are found in CITES (Convention on International Trade in Endangered Species of Wild Flora and Fauna).  Under this convention, restrictions are put on trade to prevent over harvesting particularly from the wild.
In most countries it is illegal to collect bulbs from the wild, although there are a few minor exceptions with a CITES permit. Horticultural nurseries tend to use stock from bulb offsets or seeds with many collected from estates around the UK in a managed way to ensure sustainability. Like most species at risk, it is due to loss of habitat from building and recreational ground.

Now I may have been confused by how threatened, or not, the snowdrop is, but that is nothing compared to trying to decipher the technical description of the flower.  Apparently it does not have petals!

So just what are those white things that look just like petals (to me). The flower head is made of 6 perianth segments or tepals. Whatever the bits are called, it is truly beautiful inside.

The leaves are smooth and slender and nearly as tall as the flowering stalk.  Each bulb produces one single flower which initially stands tall before drooping to the classic pendant we all recognise.

These little white pearls hide a beautiful centre which can only be seen if you take the time to grovel on the ground and gently lift the drooping head.

The common snowdrop does have some medicinal uses as it contains galanthamine which can be used to treat traumatic injury to the nervous system and Alzheimer’s.  But it also contains lectin which can be used as an insecticide.  So although it may have medicinal properties if large quantities of the plant and bulb were eaten it is poisonous to humans, causing vomiting and diarrhoea. But lets not dwell on unpleasant subjects.

Other plants coming into flower include the gorse bush and wild raspberry canes.

Oh and in doing my research I found out that some places in Scotland do starlight snowdrop walks - how lovely. 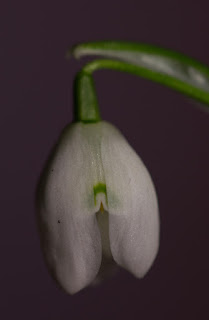 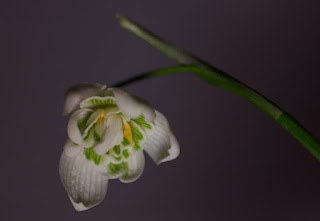 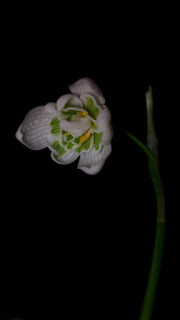 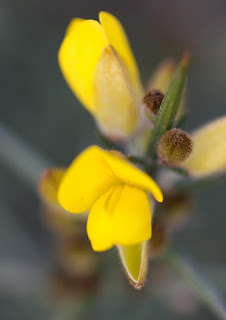