Kings cave is part of a group of caves that sit north of Drumadoon on the Isle of Arran.  The caves are formed from sandstone and are steeped in history. One of the most famous associations and the origin of the title Kings Cave comes from the belief that Robert the Bruce had  his spider encounter within the cave.  In the 17th century the cave was associated with the mythical Irish hero Fionn and his warriors and some texts of this era refer to the cave as Fingal’s Cave. What is certain is that throughout time the cave has been used for shelter, worship and teaching and whereas modern day graffiti is done with a spray can, historical markings were made with the tools available at the time. 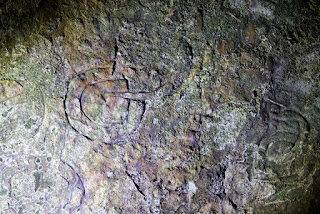 Carvings date back many centuries, possibly even to bronze age (Machrie Moor stones are about 1 mile away) and have been worn away or overlaid by both more recent carvings and mineral deposits. The caves are now an easy circular walk (from the kings cave carpark). 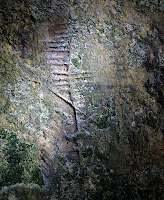 On entering the cave serpents can be found about 4 meters in just above head height on the left. 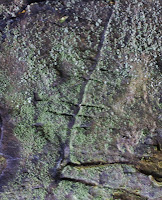 Once these are found it is quite easy to pick out Ogham inscriptions slightly to the left of the serpents and a meter or so to the right – all at the same height.  Oghan inscriptions are a medieval type of alphabet or cypher, sometimes known as the ‘Celtic Tree Alphabet.

At the rear of the cave the tunnel forks.  The left hand side has many 19th century engravings and a modern Christian symbol. 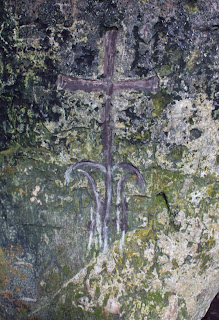 The central buttress has a large Latin cross inscribed on it with other concentric lines near the base.  This has been reworked many times and has had various interpretations, from a two handed sword (associated with Bruce and Fionn),  Christian cross and  ‘tree of life’ a common motif in early Christian art. 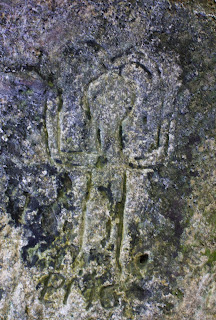 Immediately to the right of the ‘cross’ is a human figure, with hands raised.  This hands raised position is believed to represent the prayer position.  Above the head is two curved lines (upside down w).  Various interpretations have been made of this, from it being hands joined, hair or a bow. 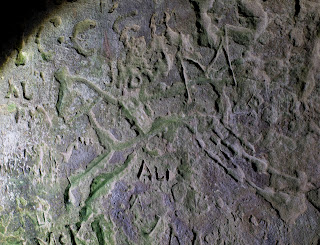 Moving down the right hand fork to where the tunnel narrows significantly (a torch will be needed), older animal carvings can be found.  The furthest is believed to be a horse  (head height) and below that (near the floor) a horse and rider. 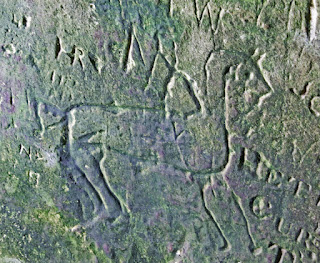 These appear quite different styles and are probably from very different dates but iron age is suggested. 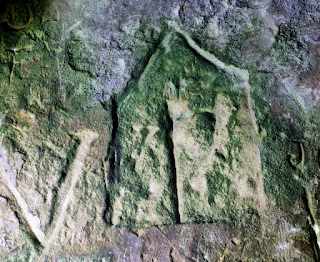 Moving back towards the entrance but still within the right fork of the tunnel, at shoulder / head height, a very clear square carving can be seen that appears to represent a house. 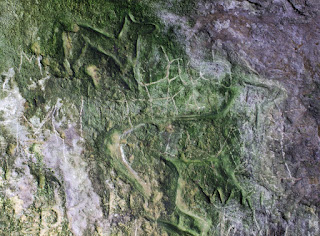 A little more to the right and two animals can be seen together.  These could be a deer and calf, or deer and hound. 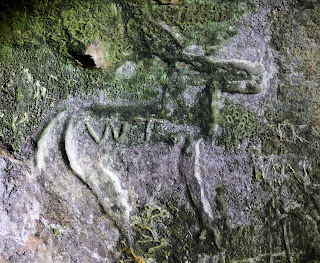 To the right again, just above head height, moving out of the tunnel another animal, most likely a horse 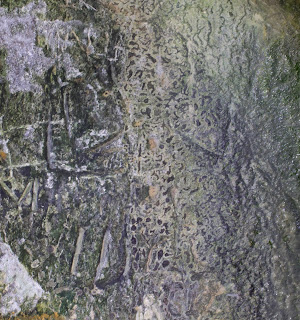 and very faintly to the right of this and now being slowly covered with algae and mineral deposits is another human figure. 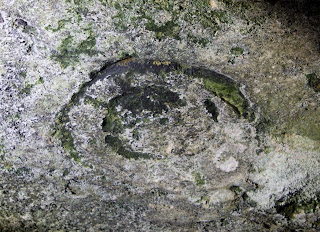 Another two meters right and at floor level a circles with a centre dot can be found. 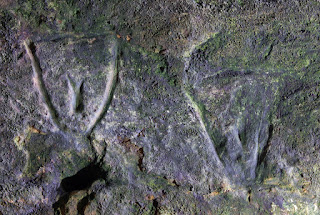 Much nearer the entrance and on the overhanging ledge are two shields / masks / animal faces.  I prefer the suggestion of animal faces when a torch is played over the carvings.

There are more to be found than those listed here, although some do require a good dollop of imagination!
Posted by Jackiesrunning at 20:05