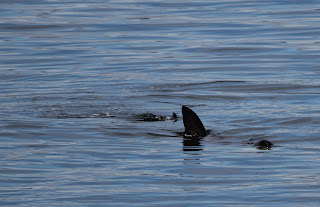 Within 10 minutes of setting off in search of basking sharks I was rewarded with my first glimpse.  The shores around the Island seem to be alive with these mighty beasts.  Although I only travelled between Machrie and round the north end as far as Sannox I saw 10 close into shore. 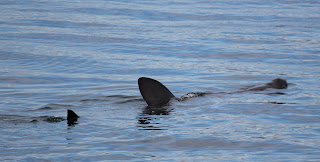 Basking sharks are the 2nd largest fish in the world and can be up to 10 meters long and weight up to 7 tons. They are easy to spot as they slowly meander at about 3 miles/5kph an hour near the surface. On the surface they appear greyish brown and create a distinctive profile. 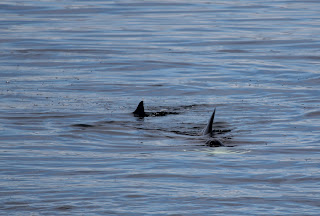 Their large mouth can be up to a meter wide, with 5000 gill rakers which are used to strain 1.5 million litres of water an hour. They feed purely on plankton and although they have teeth are non aggressive.

Occasionally they are known to breach the water like whales.  This is usually unexpected and caution is advised for anyone in the water near them.  The last known fatality was in the Firth of Clyde prior to WWII when a small boat was capsized and 3 people drowned.

These fish are protected in UK waters up to 12 miles off shore, as they were previously fished to dangerously low levels. The species is still considered at risk.