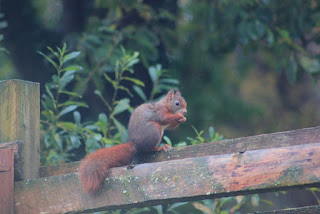 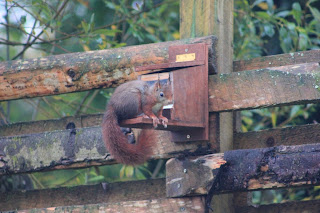 After listening to a talk at the Arran Natural History Society meeting about red squirrels I decided I should do a bit more to encourage this cute little rodent.  Arran is so lucky to only have the red variety, and by all accounts a growing population.  Unfortunately the greys carry a particularly nasty disease, one that does not make them ill but it kills the reds. Once reds and greys are in the same area it is only a matter of time before the reds become ill and start to decrease in number. Not only do the greys carry this pox, they are bigger and compete directly for available food.  Greys are spreading across the mainland rapidly, leaving only small pockets of land where reds can be found.  So Arran is an ideal environment, isolated from the greys and with  a plentiful food source within the forestry.  At this time of year they seem to be particularly active, scurrying around foraging which also leads to an increase in road kill.  In the talk it was interesting to note that in some areas, a healthy population is assumed where there is plenty of road kill!! 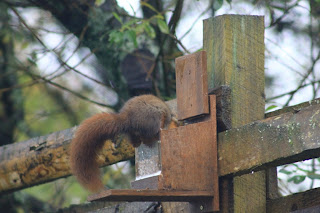 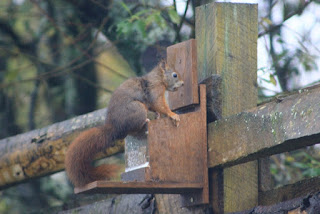 I decided that a feeder was the best way to help as this would ensure a food supply throughout the winter, so I started to look for one of these.  After being shocked by the price (not forgetting Arran postage!) one of ANHS members made me a couple.  I have seen squirrels in my garden on many occasions as they use the fence as a mini motorway, so that seemed an ideal place to locate my new feeder. The perspex front lets me see how much food is left in the box, the lid lifts, and there is a mini platform for the squirrel to sit on.  Initially I put a block inside the box to take up some room so that less nuts were needed to fill the space.  This ensured they didn't deteriorate before they were eaten.  I was advised to use a drawing pin in the lid to help the squirrels find the lid, but after watching them run pass the feeder for several days I propped the lid partially open.  I think the birds feeding from it then attracted the squirrel.  I now get two sources of amusement - the squirrel feeding and the birds tapping at the perspex. 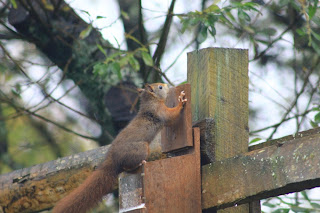 I now just need to teach the squirrel to close the lid when its finished or the birds will eat me out of house and home!